The only Tarot deck of the 15th century that has come to our day complete with all 78 cards.

The first Tarot deck completely illustrated with dynamic characters and complex scenes.  The first alchemical deck in the history. The deck that, four centuries later, inspired the Rider-Waite-Smith Tarot.

Deluxe Box and Art Box contain a BOOKLET : 22 pages with a short historical introduction and the meanings attributed  to 78 cards by the scholar Sofia Di Vincenzo. 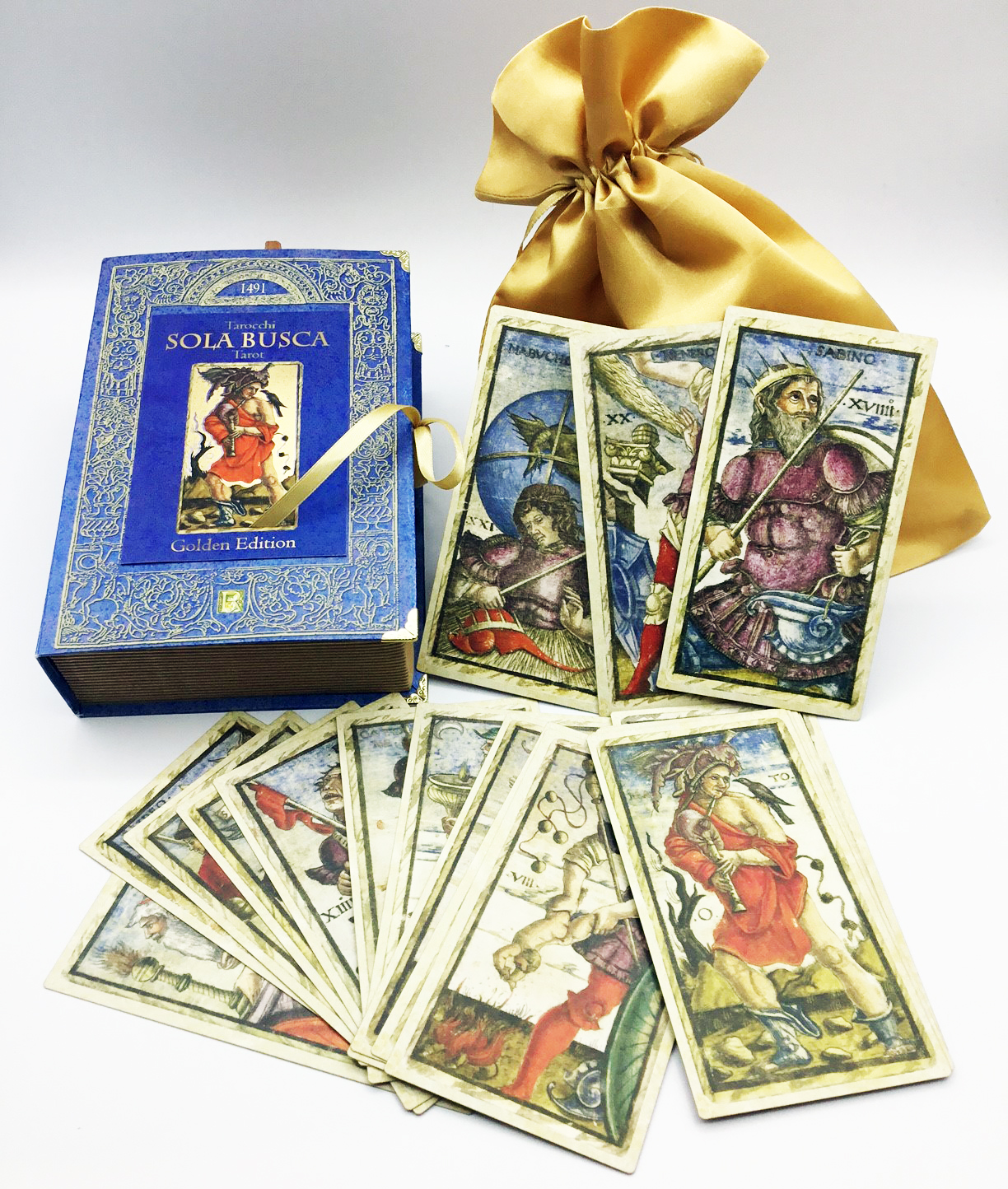 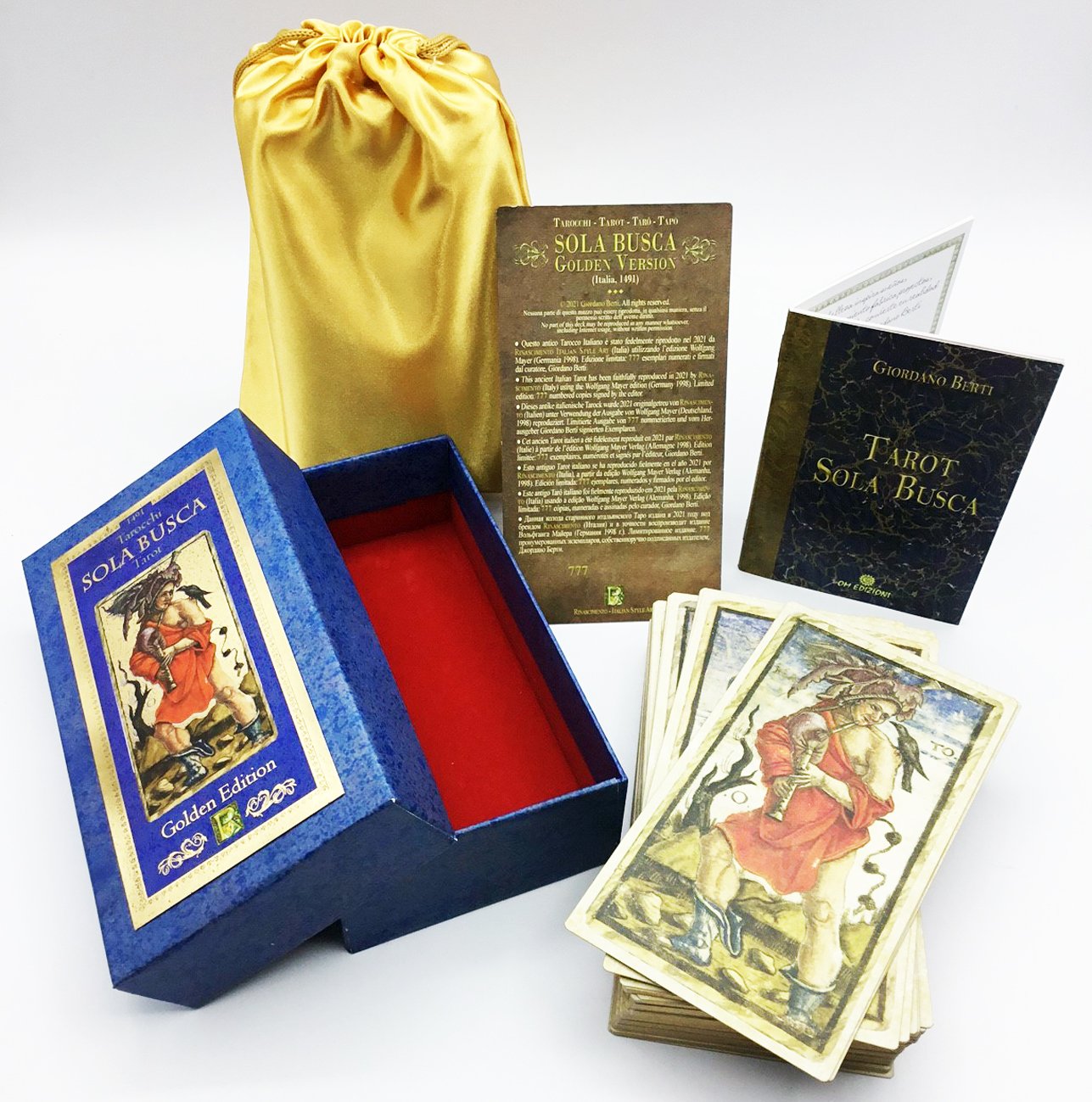 VENICE 1491 – 2021
The Sola Busca Tarot is one of the most beautiful decks ever made. Precisely the extraordinary beauty of these 78 images requires that, in their reprint, every detail is respected and valued. Hence the decision of the RINASCIMENTO staff to give life, in 2021, to the GOLDEN EDITION.

At the same time, 2021 marks the 530th year since the creation of the Sola Busca Tarot in Venice. How can we be sure? The safety comes from the writings on the cards, which unfortunately today are not very legible but which were entirely transcribed in the past centuries by various scholars. We can therefore observe that:

In addition, the coats of arms of the noble Venetian families Sanudo and Venier are painted on some papers. Hence the interpretation of the monogram MS (visible on the Ace of Batons and on the Ace of Swords) as a reference to the Venetian nobleman Marin Sanudo, to whom the commission of the Sola Busca Tarot is attributed.

The above are all conclusions accepted definitively by the most accredited historians.

From this link with Venice, the brilliant city of golden mosaics, the decision was made to make this version of the Sola Busca Tarot shine with gold, without prejudice to the philological rigor, that is, respect for the original dimensions and colors.

A video by Giordano Berti is being prepared on this topic which will be added to this page.

SPECIAL FEATURES OF THE GOLDEN EDITION 2021

How is this version characterized?

The deck is printed in a limited edition of 777 copies, numbered and signed on a guarantee card by Giordano Berti, historical director of the Renaissance.

The edges of the cards are enriched with a delicate gilding, inspired by ancient illuminated decks.

The bag that contains the cards is in golden satin.

In addition, both the Deluxe box and the standard box have an image laminated in hot gold on the cover.

A booklet contained in both boxes summarizes the history and meanings of the 78 figures.

All cards are full illustrated, for the first time in history, with dynamic characters. The 22 Triumphs depicting heroes of Greek and Roman history and, in two cases, of biblical story: Nenbroto (Nimrod) and Nabuchodenasor (Nebuchadnezzar).

The Court Cards and Numerals show scenes of daily life, images of fantasy and alchemical allegories.

The symbols of the four suits are slightly different from the traditional ones: Disks instead of Coins, Clubs instead of Wands; Amphorae instead of Cups. Swords remain Swords.

The Sola-Busca Tarot remained for nearly 420 years in a private collection. The, in 2008 the Italian State bought the deck and assigned him on deposit at the Pinacoteca di Brera in Milan, where in 2012 was made a stunning exhibition.
In 1908 the English esotericist Arthur Edward Waite was inspired by Sola-Busca Tarot to create the Rider-Waite Tarot, painted by Pamela Colman Smith.

In 1998 the German printer Wolfgang Mayer realized a wonderful version, faithful to the original colors and sizes.Mayer printed only 700 copies, adding to the deck for a warranty card with the serial number and the signature handwritten.

Until August 2016 the few remaining decks of the Mayer edition was offered for sale by Giordano Berti in a beautiful book-shaped box, designed by art designer Letizia Rivetti.
The same decks was available in a Golden box (made with strong golden paper). All the decks, both in Deluxe and in Golden box, had the original warranty certificate handsigned by Mayer in 1998.

In 2016 Giordano Berti, in agreement with the family of Wolfgang Mayer, who in the meantime had died, decided to reprint the Sola Busca Tarot maintaining the same philological rigor desired by the German printer, but adding a marbled color on the back, which Mayer had left white.

In addition, a very refined “Vellum” paper was chosen (strong like cardboard and smooth like cotton) and it was decided to round the corners to facilitate the use of the cards.

That edition was just 700 copies, like the Mayer version. A guarantee card signed by Giordano Berti indicate the progressive number of each deck.

In 2021, Rinascimento decided to create the Golden version, for the reasons explained in the beginning of this article.

This version is produced in A LIMITED EDITION OF 777 COPIES numbered and signed on a WARRANTY added to the 78 cards.

Deck: 78 cards + 1 warranty with number and signature of Giordano Berti.

– >Sola Busca Tarot by Mayer : a piece of history <–, by Djamila Zon